There are already [plenty] [of] [good] [race] [reports] out there for the San Juan Solstice 50, and most of them do a better job at telling a story, summarizing the course, and providing pictures than I could ever do.

But I still wanted to write something about the experience because…. well, to be honest, it helps me to begin preparing for the next adventure. (Since I’m up to #24 on the Run Rabbit Run waitlist, I’m starting to think that might be next.)

So today, a few days after crossing the finish line, I’m left with a feeling of amazement at just how challenging the San Juan Solstice course is, and also how all that challenge happened over a straightforward and relatively natural 50 mile loop. I mean, I could cover a lot more vertical by running laps on any number of trails in the Flatirons (Fern Canyon, anyone?), but that’d just be chasing numbers, and wouldn’t involve an aesthetically pleasing loop among the peaks of Hinsdale County.

Some of the numbers on the San Juan Solstice 50:

Add in multiple creek and drainage crossings, wet snow fields, mandatory mud bogs, and pissed off mosquitoes (I’d never before experienced such loudly buzzing clouds of bloodsucking annoyance…), and some of us in the back of the pack are going to need several more hours to complete this course than most other fifties. 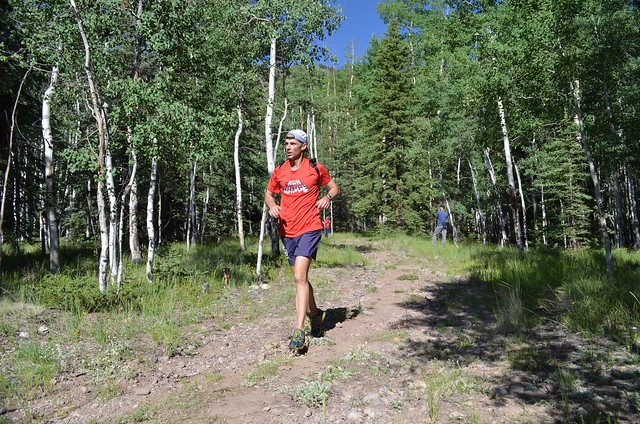 Every race has the potential to be a great learning experience, and this one certainly was for me:

There was one more interesting thing I don’t think I’ve ever noticed before, and I’m wondering if anyone else has had the same experience. A few times during the climbs up high, I found myself in a maxed-out breathing situation. Not hyperventilating, and not needing to stop to catch my breath, but often having to fully exhale or inhale with each individual step.

But despite the heavy breathing, it didn’t feel like I was working as hard as that respiration rate would suggest. And sure enough, when I took my pulse, it was about the same as what it is when I run at an easy to moderate pace.

So what’s that all about? I assumed that my heart rate and respiration rate would both increase significantly while running that high up, but my respiration seemed to be affected much more than my heart rate.

Has that happened to anyone else out there? Is it a cause for concern? Is it something that can be improved through better pacing on the course?